Q. What style of music do you play?

Q. How many pieces do you play as and what instruments are they?

Q. Do you play in other configurations?

A. When requested, saxophone or three piece horn section can be added for a fee.

Q. Why did you start this band?

A. KRVE Band is a compilation of artists that have various backgrounds including theater. As faith would have it, a situation arose where a band, separate from the one we already worked with, was needed. We called upon some friends that I had traveled/toured with when I was a musical director for theatrical plays. Since our time was limited, we needed people who were willing to put in the effort and loved the craft to produce a quality show. Hence, KRVE was born.

Q. Where are you located?

Q. Do you travel?

Q. Why should an event professional book your band?

A. KRVE Band is a dynamic group of individuals that bring excitement and fun to any event.  From the smooth vocals to the energetic stage presence, KRVE will provide an amazing and lasting impression to all who hear us. Our band’s manager, Judy, is easy to work with, organized, and leaves no detail undiscussed which has proven to be a highly desirable asset to event professionals for private and corporate events.

Q. Do you have the capability of providing your own sound & lights? 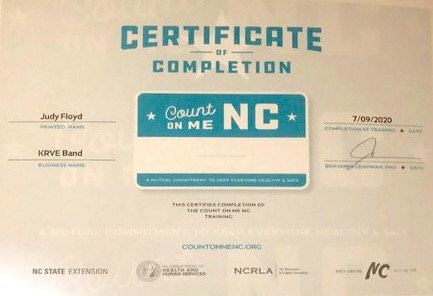 Count On Me NC Certified

Band manager of KRVE, Judy Floyd, has completed the General Best Practices for COVID-19 Management certification training, making sure event safety is a prioroty. Learn more about the certification and training at countonmenc.org.

Testimonial from Beth at the Charlotte Regional Visitor’s Authority

“The weekend was spectacular. KRVE was awesome. I will definitely use them again and everyone has asked me if they travel. I said – heck yeah!!  They were great. To be a group that is relatively new…they hit it out of the park.”