This five-piece can customize a versatile song list to fit any event ranging from full electric to acoustic shows. This group is making their mark, so you don’t want to miss out on Stella as they rise to the top. Their debut EP titled ‘Motion’ recorded at Knothole Recording Studios in Waxhaw, NC was released in August 2011. They followed up with a sophomore EP recorded at GAT 3 Studios in Charlotte, NC titled ‘Karma’ in the late fall of 2013. A third EP recorded at Blackbird Studios in Nashville, TN is planned to be released in the fall of 2016.

Q. What style of music do you play?

Q. How many pieces do you typically play as and what instruments are they?

A. We typically play as a four piece band – Lead Vocals, Lead Guitar/Vocals, Bass, and Drums.

Q. Do you play in other configurations?

A.  Yes, we can play as an acoustic duo and trio.  We also have the capability of adding a small horn section upon request depending on budget and availability.

Q. Why did you become a professional musician?

A.  I [StellaRising band leader, Kristi] started singing in church and playing in the school band at an early age. I always had a passion for music and the arts. After graduating college and studying to become a CPA, I realized there was a creative void in my life. In order to fill this void, I decided to start working with a vocal coach and began songwriting. I was introduced to my lead guitarist in 2009 by a mutual musician friend. We began collaborating and recorded our first EP. As StellaRising, we extended our band line up in 2010 and started booking shows. We have continued writing our own music over the years, but majority of our shows consist of covers.

Q. Where are you located?

Q. Do you travel?

Q. Why should an event professional book you?

A.  StellaRising plays a wide variety of music to suit any audience. Our song list consists of radio friendly, upbeat pop/rock covers to keep the crowd entertained. Our goal is to always provide the best show possible, and in a professional manner.

Q. Do you have the capability of providing your own sound & lights? 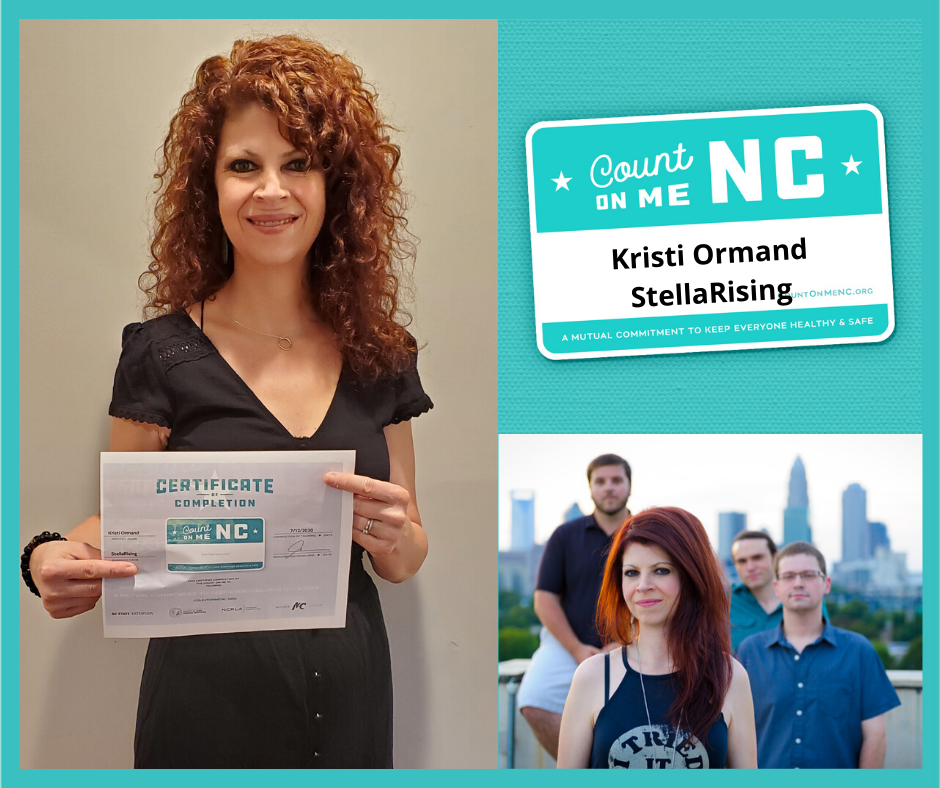 Count On Me NC Certified

Kristi Ormand, band leader of StellaRising has completed the General Best Practices for COVID-19 Management certification training, making sure event safety is a prioroty. Learn more about the certification and training at countonmenc.org.